Yeast, butter, milk, and flour, among other things – an unlikely list of ingredients that, when blended together and thrown into the heat, create one of the most enticing, comforting and mouth-watering aromas to ever waft from a warm kitchen – some even say it makes us happier and kinder.

In celebration of Homemade Bread Day (November 17), we bring you Bread, a recipe in progress that plays a major role in one Calgary family’s weekend life, from SPUD Ambassador Julia Williams.

Every weekend my husband makes bread. It’s awesome. It started when he came home one day with a KitchenAid stand mixer.

On Saturday mornings he hunches over the thing, doing something with milk and flour and yeast, and three hours later something alchemical happens and the house smells the way houses should smell but usually don’t.

Him: First you put two cups of really hot water in the mixer bowl. And two tablespoons of yeast and a tablespoon of sugar. Then you stir it but not really.

Me: But not really?

Him: You sort of move it around without stirring it.

Him: That’s the yeast. 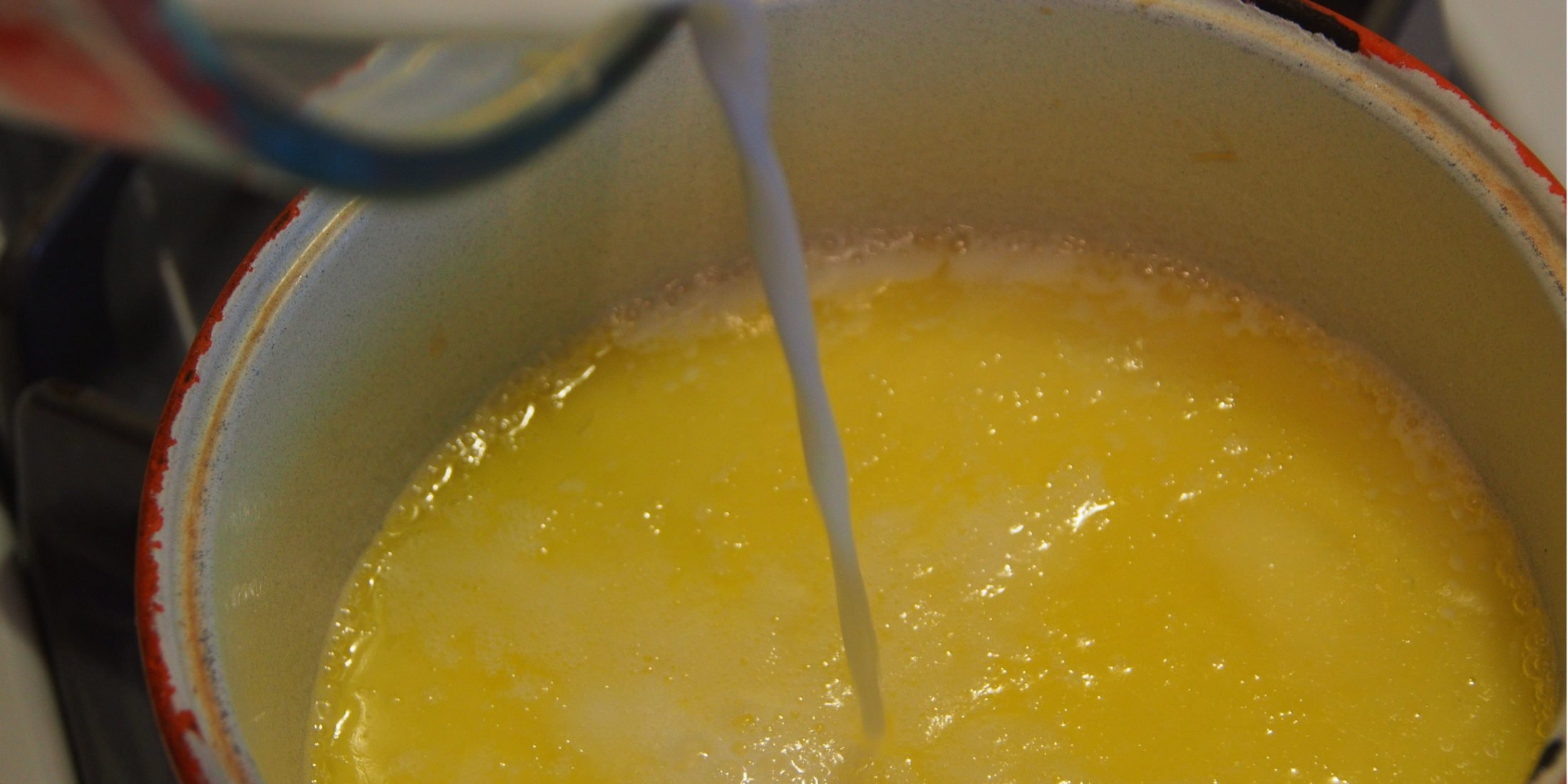 Me: Shouldn’t the sugar and salt go with the butter?

Him: No. Dissolve them in the milk.

Me: The butter is hot.

Me: It’ll melt the sugar and salt faster because of thermodynamics

Him: Then do it that way. Next you put the milk in the pan with the butter and stir. It should be lukewarm. If it’s too hot you can put in some ice cubes.

Him: It’ll need water anyway. Calgary flour is dry. Stir it so the ice cubes melt.

Me: If I stir it it’ll reduce the temperature of the liquid and make the ice cubes melt more slowly.

Him: If you don’t stir it the ice cubes will sit in their own private little puddles of coldness and take longer to melt.

Him: I think you should stir it.

Me: I’m gonna stir it at intervals.

Him: Yeah, if you have too much flour it puffs out of the bowl like that.

Me: What if you have too much liquid? 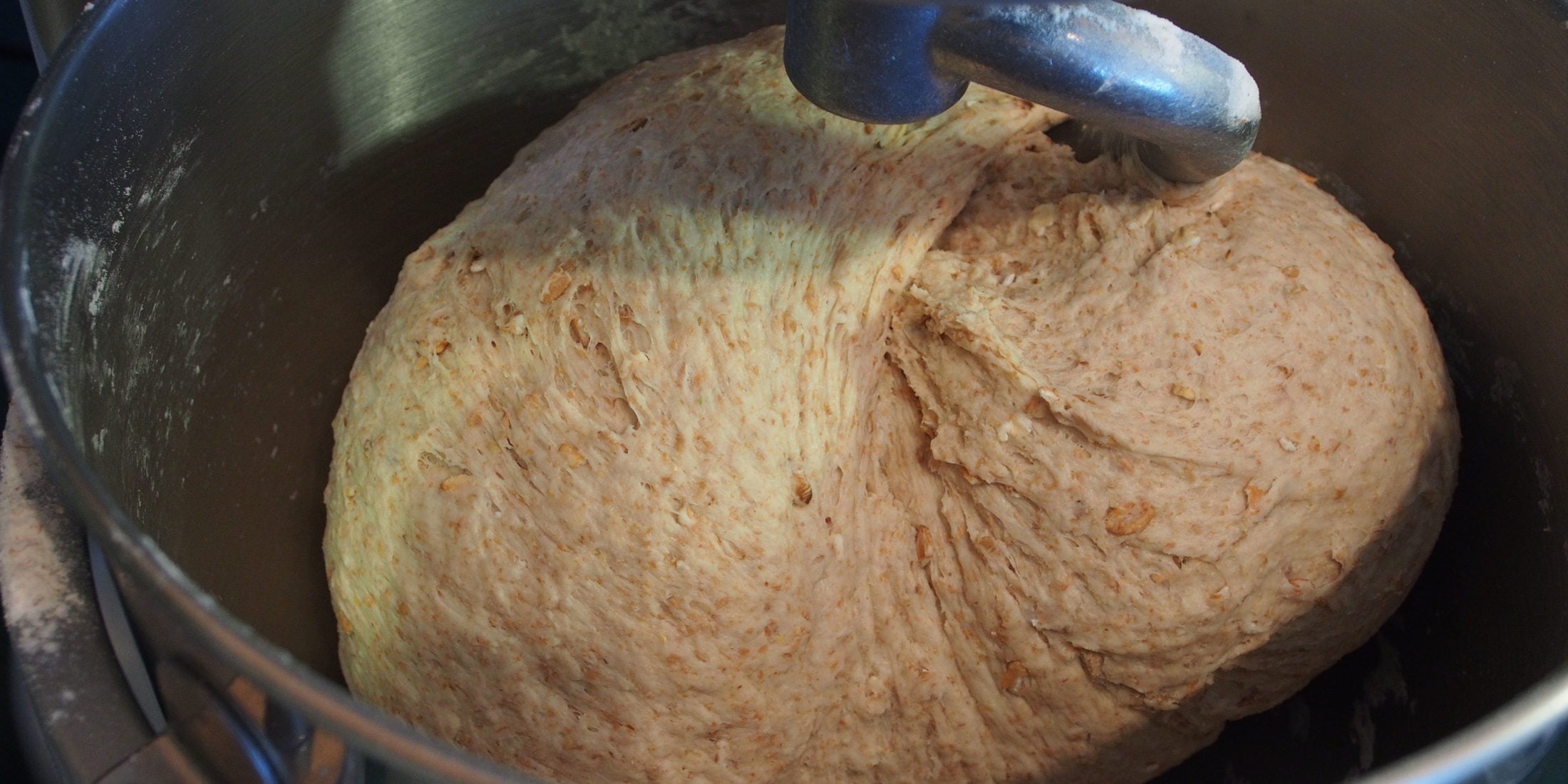 Him: Turn off the mixer and poke the dough. Does it stick to your finger?

Him: It needs more flour. It should be sticky but it shouldn’t stick…

What next? You cover the bowl with plastic wrap and ignore it until the dough rises enough to hit the wrap. Then you knead the dough until your wife notices that you’re making bread and mentions that men are sexy when they bake.

Then you divide the dough in two portions and put the portions in well-oiled bread pans. Then you ignore it some more, maybe totally forget about it, until the dough puffs up. Then you say, “Crap—the bread!” and you chuck it in the oven at 400 degrees for half an hour or so.

And then you have bread, and the bread tastes wonderful.

Set the oven to 400 degrees and place a rack in the middle position. Grease two 5’ x 9” metal bread pans. Attach the dough hook to a stand mixer. Pour the hot water, yeast and 1 tbsp. of the sugar into the bowl of the stand mixer and allow to sit until the yeast looks like fur on the surface of the water. Melt the butter with the salt and remaining 3 tbsp. of sugar, and add the milk. Add the 5-grain cereal, two cups of white flour and four cups of whole-wheat flour to the hot water and yeast in the mixer bowl and set the mixer to 2. While the dough hook stirs, alternate adding the remaining two cups of whole-wheat flour and the butter and milk mixture. The dough should form into a smooth, soft ball and come away from the edge of the bowl. If it looks sticky and shaggy, add flour; if it looks dry and stiff, add water. It should feel tacky to touch but leave no residue on your finger. Remove the dough hook, cover the mixing bowl with plastic wrap and leave for an hour, or until the dough has risen to touch the plastic wrap. Dust a surface with flour and knead the dough for about a minute, then divide it into two portions. One at a time, form the portions into tubes and place the tubes in the bread pans, seam-side down. Leave for 40 minutes, or until the dough has risen about an inch above the top of the bread pan. Bake for half an hour. Remove from pans and let cool on a wire rack.