FIVE GRAINS TO SWITCH OUT THE RICE IN YOUR RISOTTO

Risotto is one of the most common ways to cook rice in Italy. Despite being a simple appetizer dish where it originates, it has been recreated as the main dish in many parts of the world. Rice cooked in rich broth to a creamy consistency mixed with all your favourite ingredients–what’s not to love?

While a warm bowl of risotto may be comforting on a cold day, its versatility allows for endless culinary possibilities. And it’s not just the vegetables and the meats that people are putting on rotation; it’s also the grains.

I have recently noticed that many restaurants have been serving risotto with ancient grains (I tried a farro-based one recently, and it’s incredible, to say the least). So I’ve decided to try some amazing risotto recipes that doesn’t involve using rice. I can confidently say that these recipes will save your life–that is if you’re short on grain options.

Farro is one of the many ancient grains that has enjoyed a recent revival in popularity. With a high content of fibre and protein, this grain is perfect for switching out the rice to make an amazing risotto recipe.

Wheat berries are very similar to farro–there’s actually a debate on which one is better–in both look, taste, and texture. There is a slight difference in their nutritional value, which means it would be beneficial to add this ancient grain to your pantry.

Where does one even begin with lentils? They’re part of a food group called ‘pulses’, which have been deemed the food group that can feed the world by the United Nations. And their astounding protein content also makes them one of the best protein sources, especially amongst vegan foods.

Barley simply doesn’t get enough credit. We put it in salads, stews, soups, and porridge for that aromatic, nutty flavour. As with many other whole grains, barley is an excellent source of fibre and protein. And its texture makes it a wonderful substitute in a risotto recipe.

Okay, not a grain, but if you’ve never made cauliflower rice, you’re missing out. Cauliflower rice is the holy-grail ingredient to fill you up and avoid any sort of bloating. And if you’re looking for a spring recipe, a cauliflower-based dish will make sure it stays light, refreshing, and nutritious.

These are just some of the many grain options you can substitute your rice with. Have you tried any of these recipes or making risotto without using rice? Share with us any tips or recipes you have! 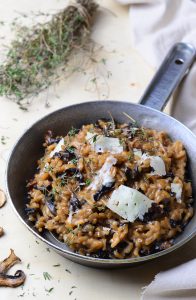