DRIVER BLOG: SO YOU WANT TO BE A SPUD DELIVERY DRIVER…

A colleague at one of SPUD’s Be Fresh stores asked me about my job recently. She was considering changing jobs and trying her hand at delivering so she asked me a few questions about what it’s like. I explained the basics and but after considering her questions, I’d like to offer a bit more detail..

While the routes vary quite a bit, I’ve found there’s challenges and yes, joy, in each one. Some are physically less demanding but traffic and parking can be a headache. Routes like downtown and city centres. Others take more effort but if you enjoy the challenge, have benefits as well.

In my case, delivering to Squamish once a week, there’s some spectacular scenery. 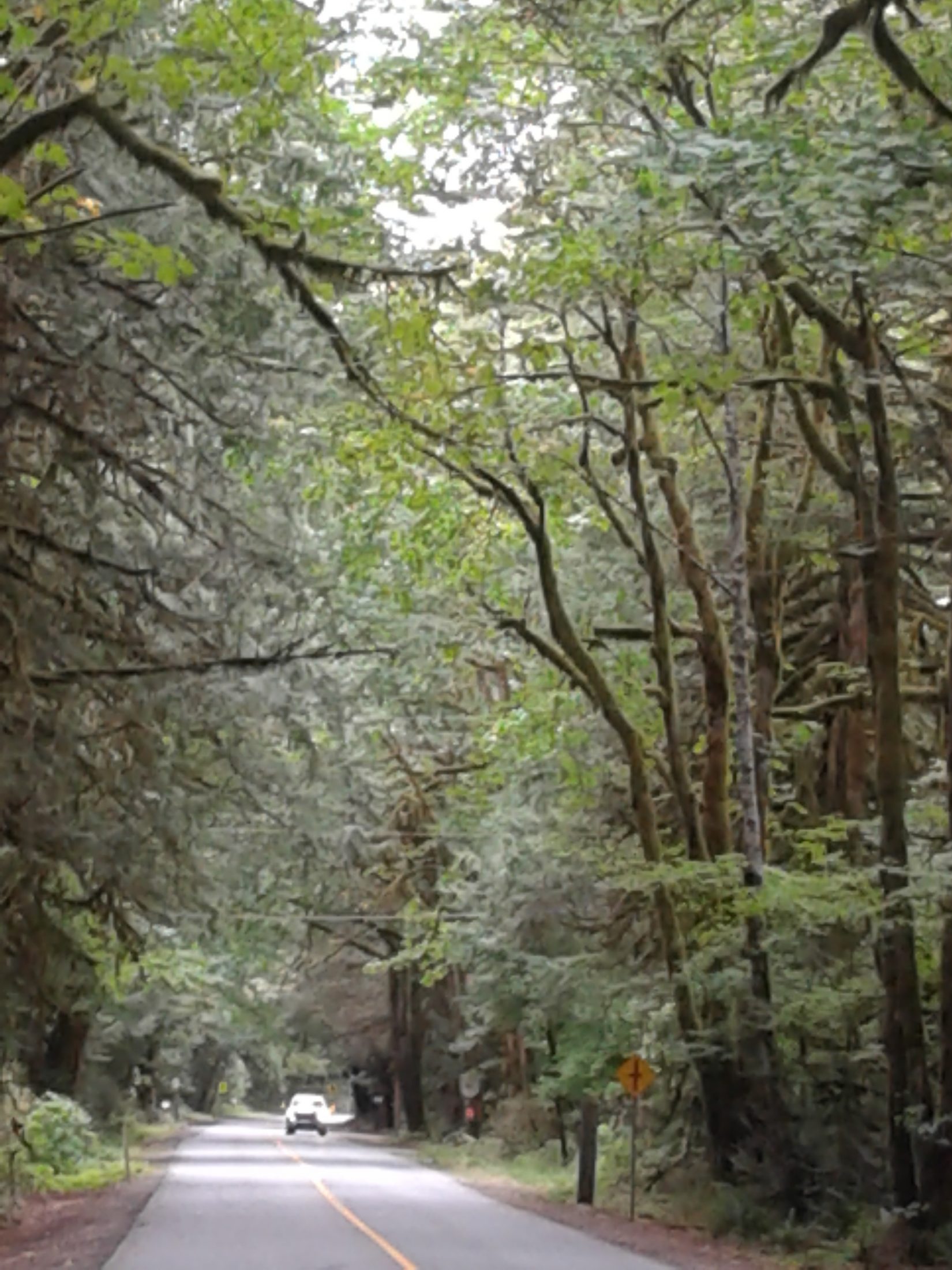 The distance between deliveries can often be measured in meters. After delivering, the GPS lays out the route to your next delivery and gives the estimated time and distance. A typical example would be: two minutes and 450 meters or seven minutes and 2.5 kilometres. One day, after having already delivered the Squamish route maybe a dozen times, when I called up my next delivery the GPS told me: 27 minutes and 22 kilometres.

This was not a case of travelling to another town. I put in the address a second time, this time manually, and got the same result. Weird. I didn’t know Squamish was that big!

It was an address on Squamish Valley Road, which I had never been on. I had driven to Whistler hundreds of time but never in this direction, which is northwest, rather than northeast toward the ski resort.

Spectacular! Moss covered trees converged over the roadway, almost forming a tunnel. I had to pull over and snap a couple photos. I was amazed – not just about the views, but that SPUD delivered free to homes that far away.

Who wouldn’t want free delivery of groceries is your nearest grocery store is 20 kilometres away? 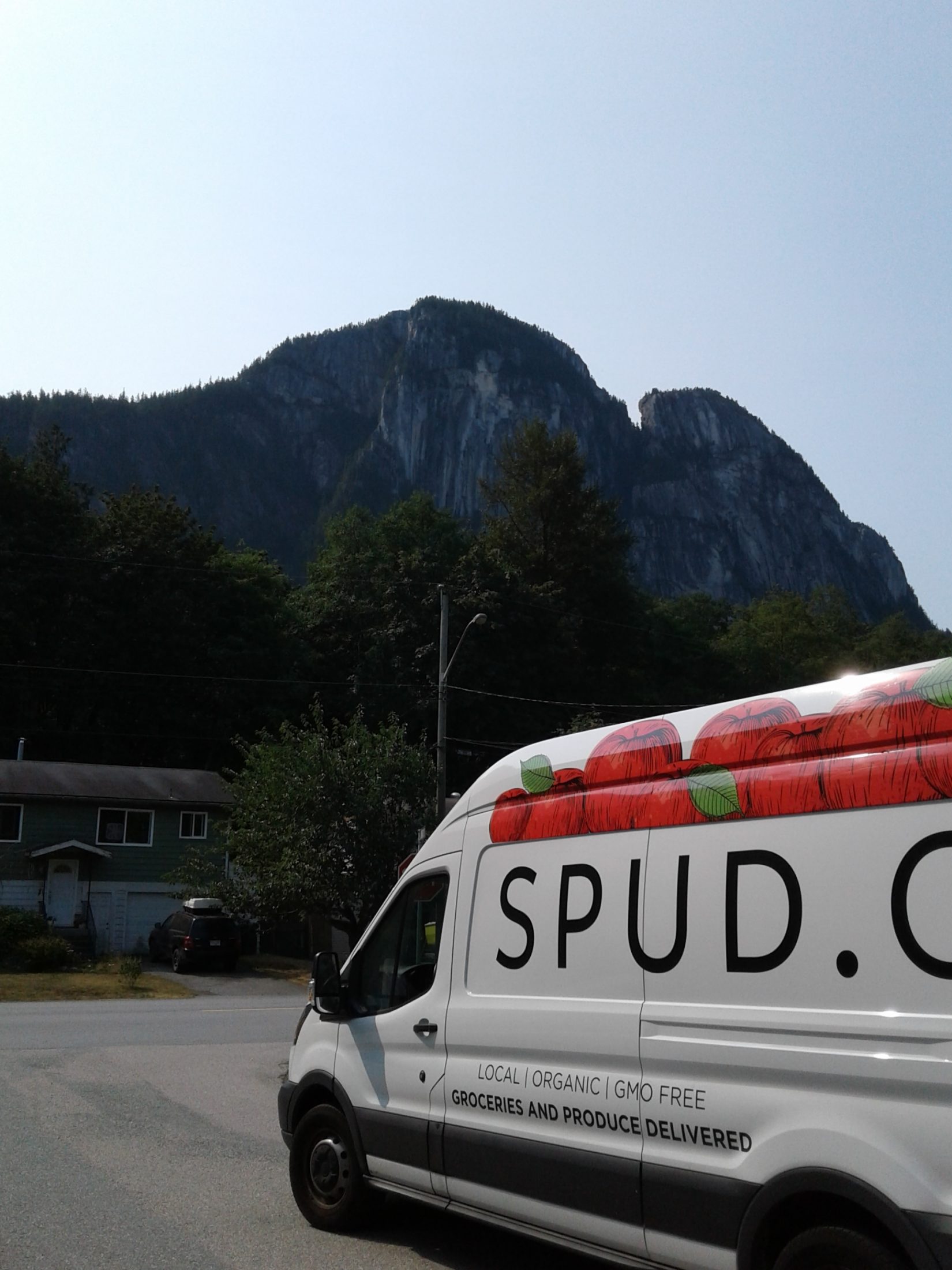 Of course, majestic mountains surround Squamish and you really need to stop and take in the view now and then.

So if you’re considering the job, it helps if you enjoy seeing new places. You also need to enjoy working outdoors. Not minding rain doesn’t hurt either.

Then there are the physical challenges involved. The Squamish route includes stops in Britannia Beach and Lions Bay, which has some very steep walkways and driveways. It makes sense to get someone else to carry the load for you and SPUD delivers!

Few areas pose greater challenges than West Vancouver, however. Imagine having spent a full day moving a tonne and a half of groceries to people’s doorsteps, then find a new address to deliver to at the end of the day.

Fifty-five steps, and four heavy bins to carry up them, one at a time.

It’s all part of the job. That is, if you want to be a SPUD delivery driver.. 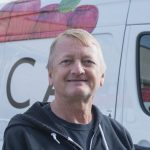 Incurably curious, Peter likes to find stuff out and tell other people about it. A former journalist, he believes if brevity isn’t the soul of wit, it is at least a virtue.