Voila! all your items will be displayed on one page for easy browsing!
Type a list of items and hit the "Enter" button after each one, and we'll find them for you:
List Search
Service Updates due to COVID‑19
Learn More
skip to Main Content

If you are into trying seriously great pasta and haven’t heard of Cowichan Pasta yet, listen up. This is a story of passion and dedication to making a craft above and beyond your typical noodles.

Matt Horn is the product of the culinary management program at Ottawa’s Algonquin College. Horn started his culinary career at Domus Cafe in Ottawa, then at Mariposa on the outskirts of Ottawa. Followed by four and half years as the Chef of Cowichan Bay’s iconic Masthead Restaurant and Amuse Bistro for one year. 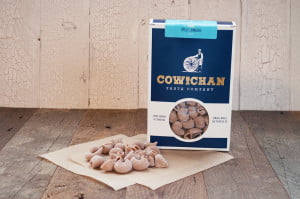 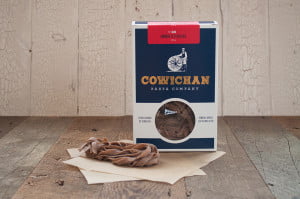 Wanting something of his own and seeing a special artisan niche, Cowichan Pasta came to life in 2010. Cowichan Pasta works with local farmers to grow ancient grains for their pasta production which are then milled at True Grain Mill and Bakery. Producing frozen ravioli and dried pasta using ingredients from BC and many local products such as salt from Vancouver Island Salt Company, Cowichan Valley beef, BC spot prawns, vegetables and foraged items like seaweed and mushrooms when in season.

Cowichan Pasta is the first pasta company in Canada making stone ground pasta with ancient grains such as Spelt, Emmer and Khorasan (Kamut(™)) that is stored in whole kernel form, and then milled fresh with a chosen grind that maintains more of the fibre portion of the wheat than over processed grains.

Matt Horn was recognized for his entrepreneurial spirit in 2013 as one of the Top 40 Foodies under 40 in Western Canada by Western Living Magazine.

Who doesn’t love snapping off a piece of aloe vera for a sunburn, or bagging…

Staying upbeat during the winter can be tough. For almost all of us Canadians, we’re…

5 WAYS TO GET THE BEST SLEEP OF YOUR LIFE

During the holidays, sleep is one of those things that can get put on the…

Sip Sip Hurray, it's wine Wednesday! Are you a c

What’s your go to dinner on days when time simpl

DYK now that since bins have been back we are usin

Today is the first day of vegan month. A month for

🍕👻Pizza ghosts, the spooky snack before all

The rumours are true Vancouver! we are now deliver

Chicken is one of the most versatile meat proteins

Can I get a 'heck yes' for apple season?! What's y

A new recipe to add to your meatless monday meal p

Do you ever look at a spaghetti squash and think:

Have you tried Sap Sucker? Sap Sucker is an organi

Swipe to bake 👉 Pumpkin season is in full force

Sangria doesn’t have to just be a summer drink!

Pumpkin pie? Apple pie? Or both? Let us know in th


Error: API requests are being delayed for this account. New posts will not be retrieved.